You're carrying Soviet spy tech in your pocket. Here's how it got there.

If you want to get somewhere in London, you're most likely going to use the Underground ("Tube", sorry). So you go to a station, tap your card or phone to the turnstile to pay, and you're on your way. It's a routine that happens millions of times a day, and nobody ever seems to stop and consider the fact that they're using the product of Soviet spy technology. Because why would they? That's a ridiculous thing to spend your time thinking about.

(Hi, it's me: the person who spends time thinking about this.)

If you have a smart phone, a credit card with tap-to-pay, even a Nintendo Amiibo, you're using something that wouldn't have been possible without an infamous Soviet spy program, the grandfather of electronic music, barcodes on trains, and Star Wars Episode 1: The Phantom Menace.

Here's the story of how near-field communication (NFC), which powers nearly all "touchless" technology today, came to be.

1. Lev and The Thing

In TV and films about the Cold War, there's this recurring image that I absolutely love: person intently listening to headphones.

During the Cold War (and probably still), there was a whole sector of people whose job was to just listen. Silently scrubbing through air traffic frequencies, timing sonar pings, analyzing the word choices of local numbers stations… you never knew when you might hear something important, so listening was a key part of the war effort. And the reason why became especially clear in 1951, when a British radio engineer stationed in Moscow, dutifully scrolling through UHF frequencies, heard an American voice. Not a radio program, not a passing airplane, just… a conversation. Somebody had been bugged.

The only American worth spying on in Moscow at that time was the U.S. Ambassador, one George F. Kennan. And, sure enough, after doing more targeted sweeps of the ambassador's residence (the "Spaso House") in the same frequencies used by the radio engineer, they found the hidden microphone: in a large, wooden carving of the U.S. Grand Seal, hanging in the study.

The Thing - Image from the Crypto Museum

It became known as "The Thing", and what was most remarkable about it was that the Seal had been a gift from the Young Pioneer Association (the USSR equivalent to the Boy Scouts of America) to one of Kennan's predecessors: the man who held the position three Ambassadors prior, Averell Harriman, who would later go on to be Governor of New York. It was given to him just weeks before the end of World War II, in August of 1945, as a gesture of friendship between the United States and the Soviet Union. It hung in that study, which was checked for listening devices every day, for seven years.

Keep that in mind while we rewind the clock back a little further, to 1939.

More specifically, Lev wanted to make musical instruments. He had spent the last eight years touring the United States, showing off his inventions and meeting with the greatest minds and artists of his generation (Albert Einstein and Sergei Eisenstein, to name two). Then, he set up shop in New York, and began working on a new, very big project: a room which was itself an instrument, to be played by four dancers.

I'm sure you could name all sorts of reasons why Lev would want to make this new instrument (it sounds cool as hell, for starters), but my personal theory is that he made it for love, both for the musician and for the audience.

The musician in this case was Lev's wife, Lavinia Williams, a prima ballerina in the American Negro Ballet. Like Lev, Lavinia held a deep appreciation for her art, both its science and its mystery. She and Lev also shared a love of their respective heritages, and Lavinia would spent much of her later life teaching Caribbean and Haitian dance. Her precision as a dancer helped Lev to see that not only could one's hands manipulate an instrument, but one's whole body could create music, if given the right space in which to do so.

The audience was Lev's home country, Russia, and more specifically, Vladimir Lenin. During the Bolshevik Revolution, which served as the backdrop to much of Lev's early life, there was a renewed interest in the blending of art and science, and in 1922 Lev was invited to the Kremlin for a performance. Lev's instrument, which would later bear his name, "Termenvox", seemed to Lenin to be a perfect merger of artistry and electrical engineering. And when Lenin requested to play it himself, and quickly proved to be proficient at it, Lev's heart was forever rooted in Leningrad. While Lev didn't get to meet Lenin again before he died in 1924, I believe it was this memory that drew Lev back to Russia, to bring back all he'd learned and built in a grand performance for his home country.

Lev never got to make that performance. War was coming, and fascist troops were moving ever-closer to Leningrad. By the time Lev's request to return to the Soviet Union had been granted in 1938, what would become World War II was beginning. Instead of returning home, Lev was brought to a sharashka, a secret military lab. He and Lavinia exchanged letters for a time, but eventually their communication was cut off. Lev's very existence became a national secret, and by 1945 he was presumed dead.

Now, I've been purposefully a little obtuse here, because I wanted to talk about Lev as a man before we talked about Lev as an inventor. He was, by all accounts, and intensely caring man, passionate about people and science and art. He believed that there could be a one-to-one physical connection between man and music, and devoted his life to an almost spiritual pursuit of it. It was said on several occasions that he had "the most beautiful hands in the world". He was, in addition to all that, one of the most important inventors of the last century.

You may have heard of him via the anglicized version of his name: Leon Theremin. The instrument that made him famous also bore that name when it came to America: the Theremin. Here he is, performing "Deep Night" in 1930:

The Theremin was the first fully-electronic instrument, and the parent of synthesized sound as we know it. You've heard it used in countless science fiction soundtracks, such as The Day the Earth Stood Still, or more recently on Disney's Loki series.

You've heard it on records, too: the Beach Boys used one in "Good Vibrations", and Led Zeppelin toured with one in the '70s. Bob Moog, founder of Moog Music and inventor of the modern synthesizer, was inspired by (and started his career by selling) the Theremin. Without the Theremin, whole genres of music (electronic, techno, dubstep, etc.) would sound drastically different, or might not exist at all.

I say all of this to mean that the Soviet Union didn't just secret away a well-intentioned artist; they captured the man who permanently changed the way the world made music, and made him create tools for espionage.

And, as we've already covered, he was very good at it. Theremin brought together his mastery of both electricity and music to create The Thing (dubbed "Reindeer" by the Russians), in a way that only he could have come up with. Here's how it worked:

Inside a wooden copy of the US Great Seal, a circular hole was cut, to act as a sounding board, similar to the opening in a guitar. In it, Theremin placed a small membrane, attached to a short antenna. 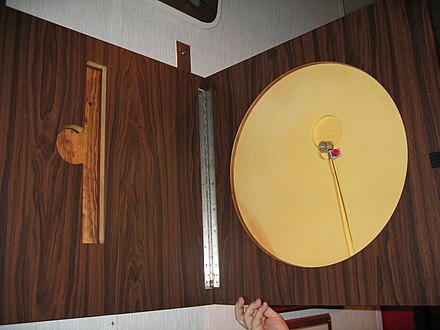 Interior of The Thing - Image from Wikipedia

The antenna was tuned in such a way that when you aimed a radio signal of a certain frequency at it, it would be "illuminated", resonate at a corresponding harmonic frequency, and send the harmonic signal back. Sort of like an echo, but at very high frequencies. This was already a known concept among military scientists, and the British Royal Air Force was attempting to use it during World War II as a rudimentary "friend-or-foe" system. Basically, they would shoot a radio signal at an aircraft, and if that other aircraft was equipped with the right antenna, it would send a signal back, and they'd know that plane was friendly. If there was no signal, or the wrong signal was returned, that plane would be shot down. (The plan was full of problems, like, "what if the antenna breaks" or "what if the plane is flying too fast/slow", and was eventually dropped for a different method called "pip-squeak", which had planes broadcasting their own signal for a few seconds every minute.)

The difficult part was getting sound back from the device, as most listening devices of that time required a power source for a microphone and return signal. That's where Theremin's knowledge of sound and radio frequencies came in.

The real genius of The Thing was a thin metal disc, just under 20mm across. It was situated in the middle of the cavity inside the Great Seal, just behind some small holes that had been drilled into the eagle's beak. It acted as a microphone, and vibrated very slightly whenever sound waves hit the wood carving. That vibration caused the antenna's return frequency to change very slightly, so that the return signal would go up and down in pitch along with the sound in the room, all without requiring a power source or complex electronics. Theremin then used what he had learned while making his instrument—which turned variations in electromagnetic waves into sound—and devised a device that could detect the variations in the return signal, and use those to power a small speaker, so one could listen in from the next street over. (And if you think that's cool, he did the same thing with lasers, and so can you.)

This was the first instance of a portable device that could transfer information over radio waves, without needing an external power source.

Contrary to popular belief, Theremin didn't die in 1945, and in fact he would live a long and happy life. In the seven years that The Thing remained undetected, Theremin claimed "all we heard was everyday chatter — no government secrets", and after the war he was allowed to go back to making music and teaching at the Moscow Conservatory of Music. He re-married, had two children, and even travelled back to the United States in 1991 (there's a lovely video of his visit to Stanford at that time). I found rumors that he found and re-proposed to Lavinia during that trip, but can't verify it (it just sounds so darn romantic).

Leon Theremin passed away in 1993, at the age of 97, surrounded by his family in Moscow. But his inventions, both the Theremin and The Thing, would live on.

Coming soon! I'm doing a lot of research for this part, and limited free time has meant that it's coming along slower than I'd like. If you liked part 1, let me know on Twitter!